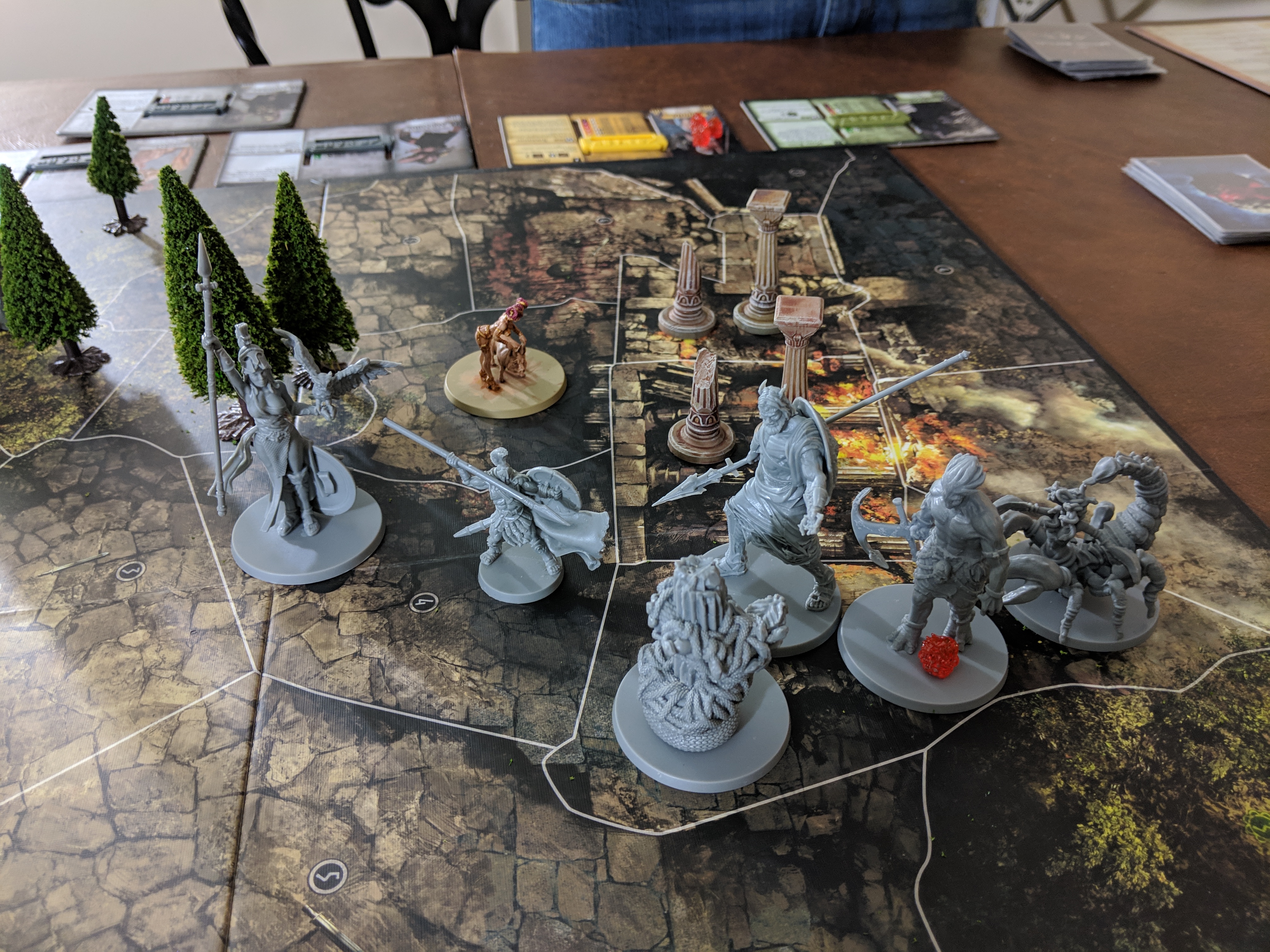 An epic battle between Zeus and Athena.

The battleground: Olympus in Ruins 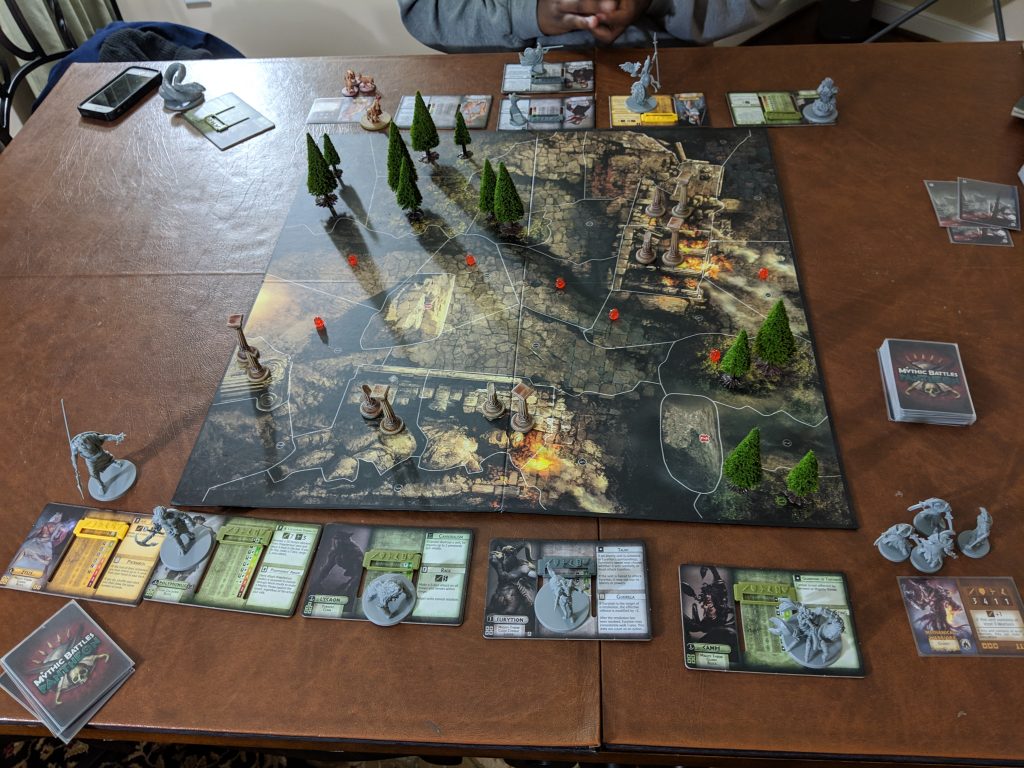 The game started out slow, with both sides tentatively entering the battlefield. Campe saw an omphalos in a nearby forest and moved to retrieve it for Zeus. As she picked it up, Ladon entered the battlefield, already in striking distance. Polyphemus stepped up to assist her by hurling a tree at Ladon, seriously wounding the creature and knocking it away. 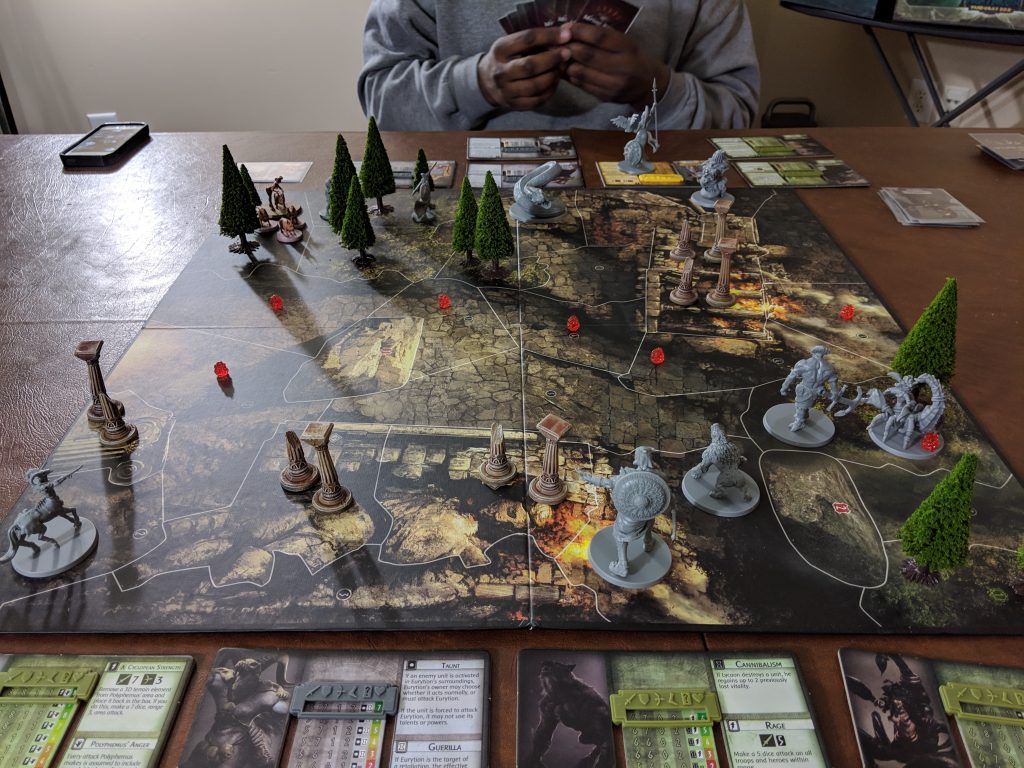 Next, Aegisthus made a play for an omphalos in the middle of the battlefield. Lycaon rushed forward, climbed onto a nearby rock, and took a swipe at the hero. Aegisthus’s reflexes were quick, and he took minimal damage, allowing him to grab the omphalos and head back to Athena. 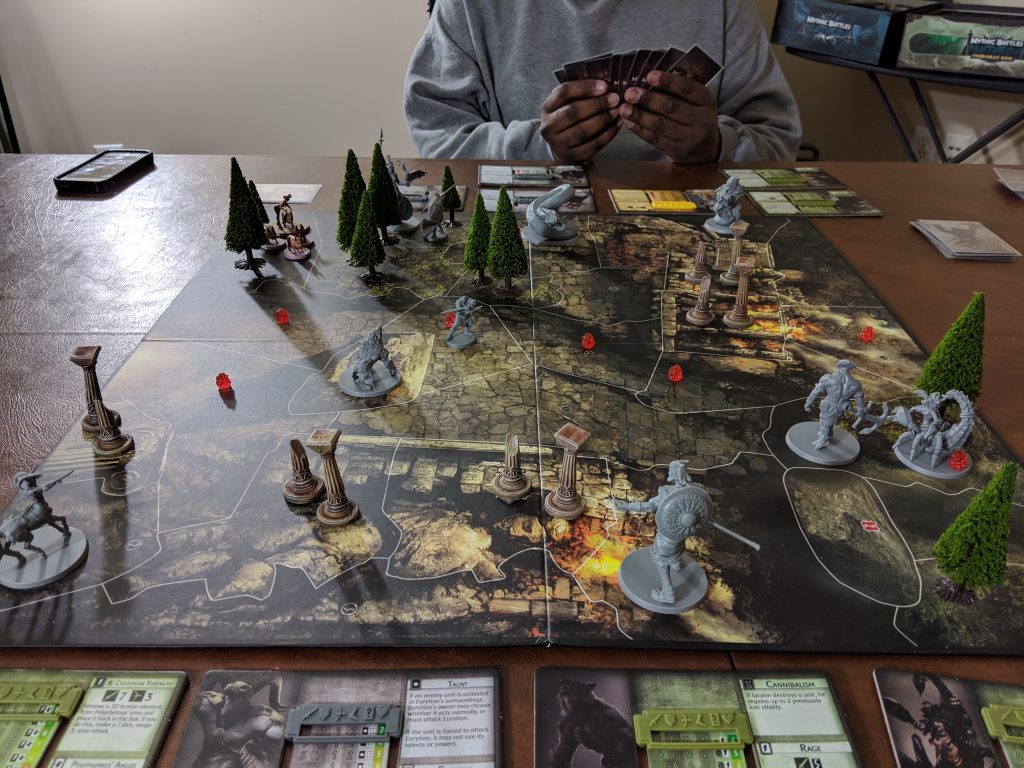 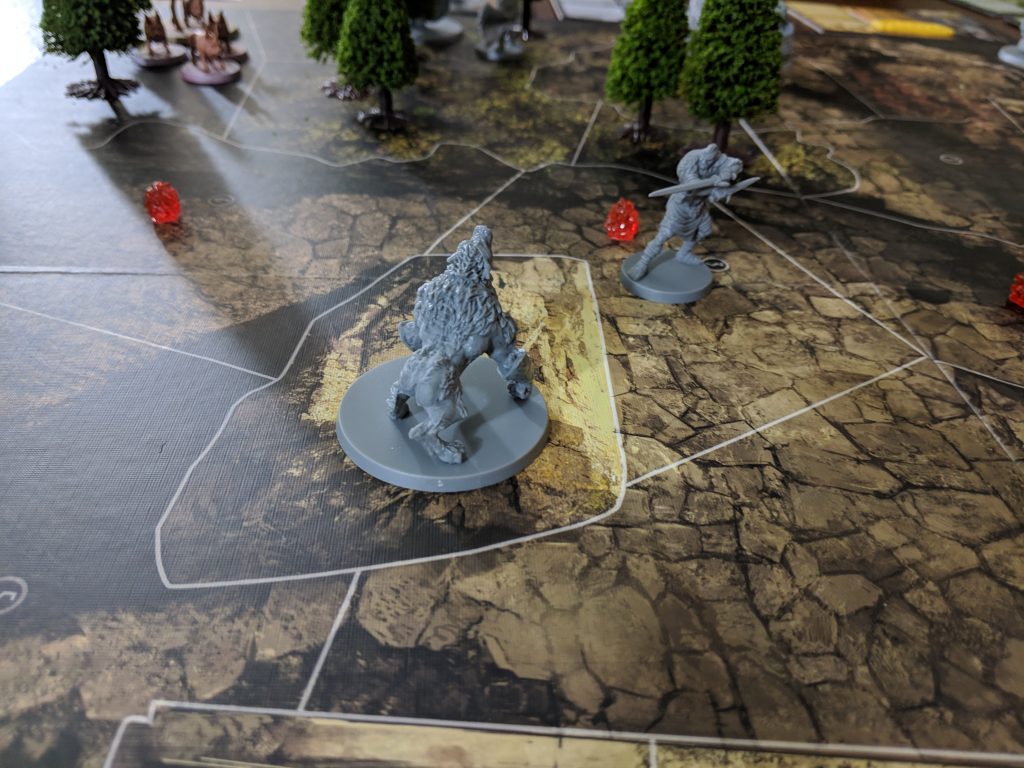 Eurytion gave chase, attacking Aegisthus as he retreated. Wounded and bleeding, Aegisthus hid in the trees, trying to recover and finish delivering the omphalos. Eurytion, however, wasn’t done yet. Next he taunted Circe from the protection of the forest. 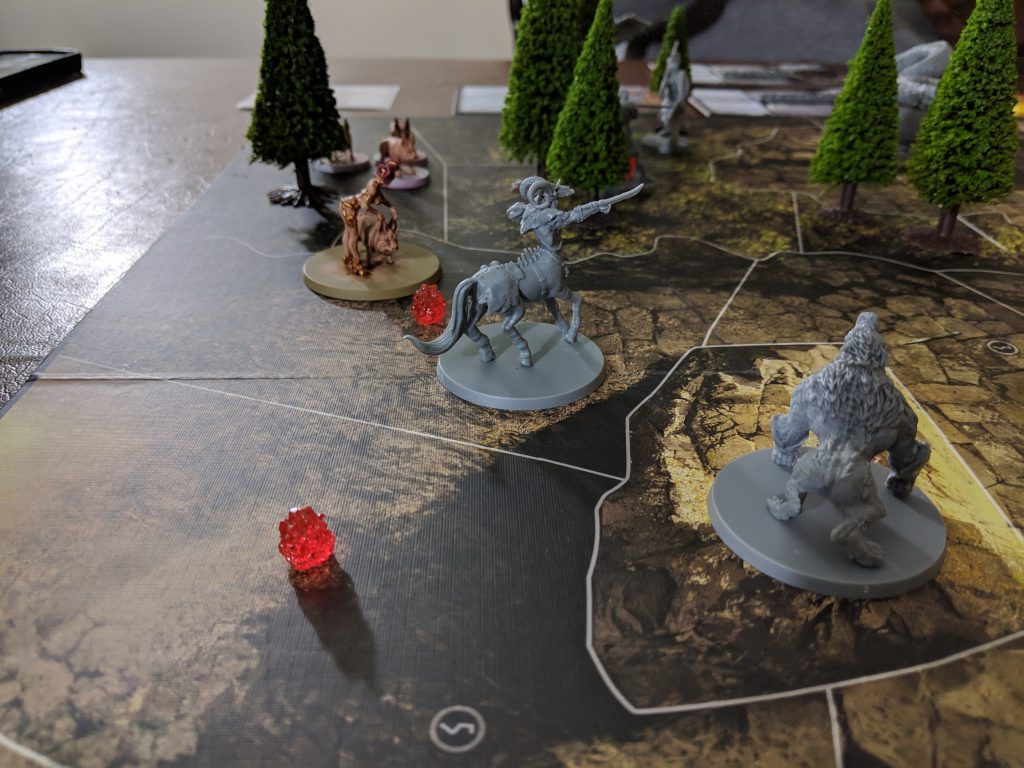 The Basilisk sprang forward in her defense, and sank its fangs deep into Eurytion’s flesh. Although Eurtion survived the initial attack, he soon succumbed to the creature’s deadly venom. In a beastly rage, Lycaon dove from its perch and tried to maul the giant snake. The attack failed to land a solid blow, leaving the Basilisk free to climb upon the rock and sink its venomous fangs into another fatal attack, felling Lycaon.

Seeing two allies fall to the mighty Basilisk, Polyphemus rushed forward, inflicted a grievous injury to the creature, and pulled it from its perch. Knowing that the Basilisk, though wounded, was still a threat, Campe stepped up and finished it with her mighty pincers. 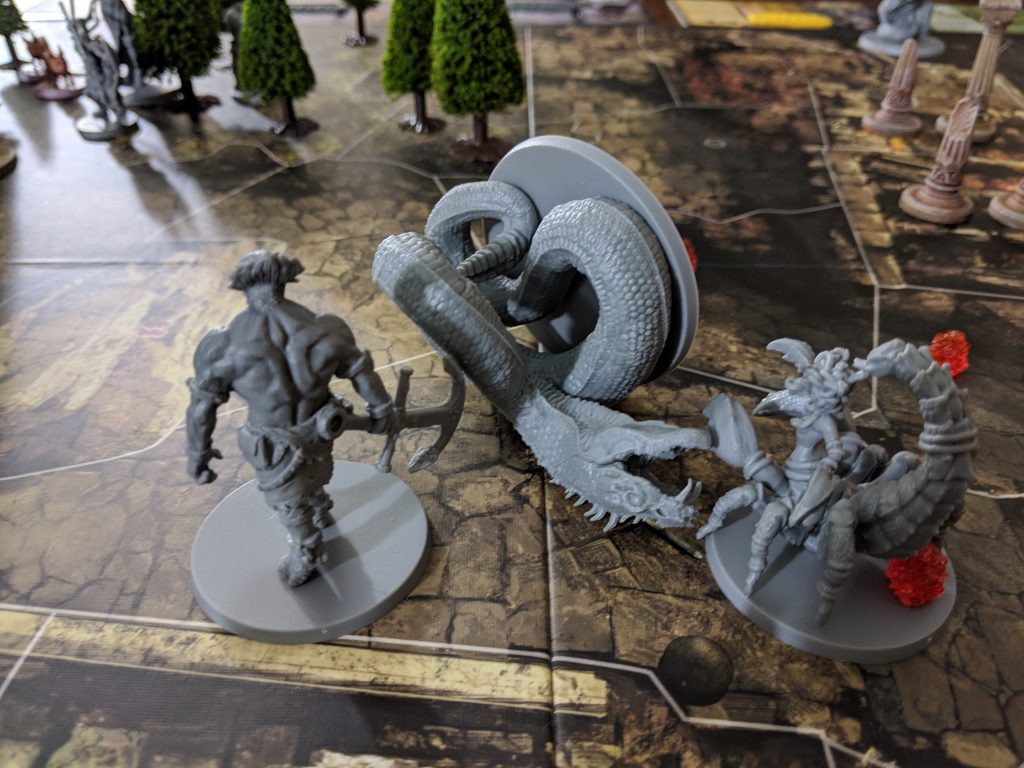 At this point, both sides paused to regroup. Zeus, growing impatient, summoned his minions to bring him some omphalos to absorb. Polyphemus obliged by grabbing a gem from his surroundings, and both he and Campe rushed back to their god. Meanwhile, Athena stepped forward to absorb the omphalos Aegisthus had retrieved. 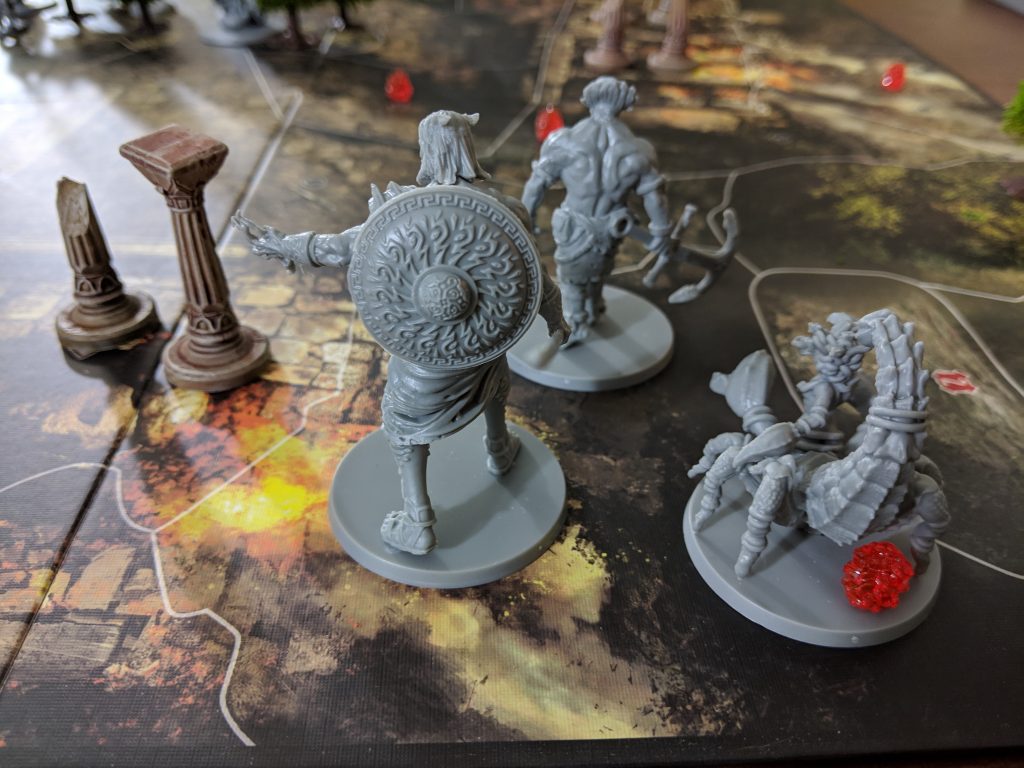 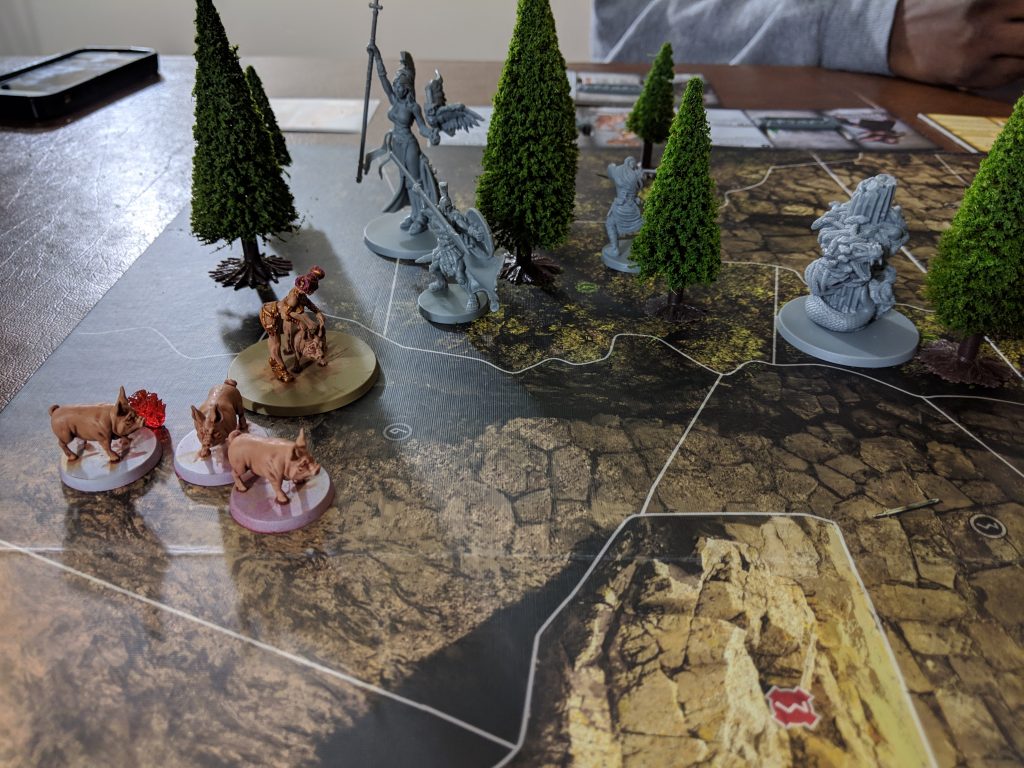 Athena, realizing only three omphalos remained, sent Circe into the middle of the battlefield to retrieve another. Realizing the danger of that central location, Circe summoned her pigs to protect her. Unfortunately, that was not enough to save her from Polyphemus’s rage as he hrled a tree into her area. Though Circe survived, she suffered grievous wounds and was knocked clear of the omphalos. 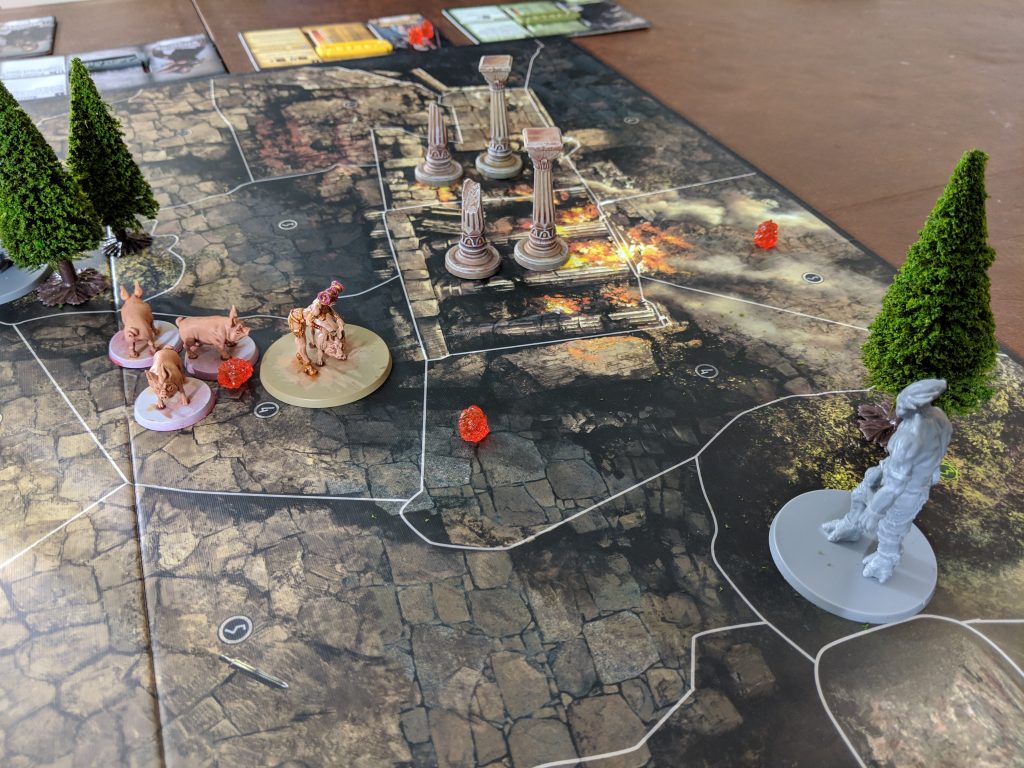 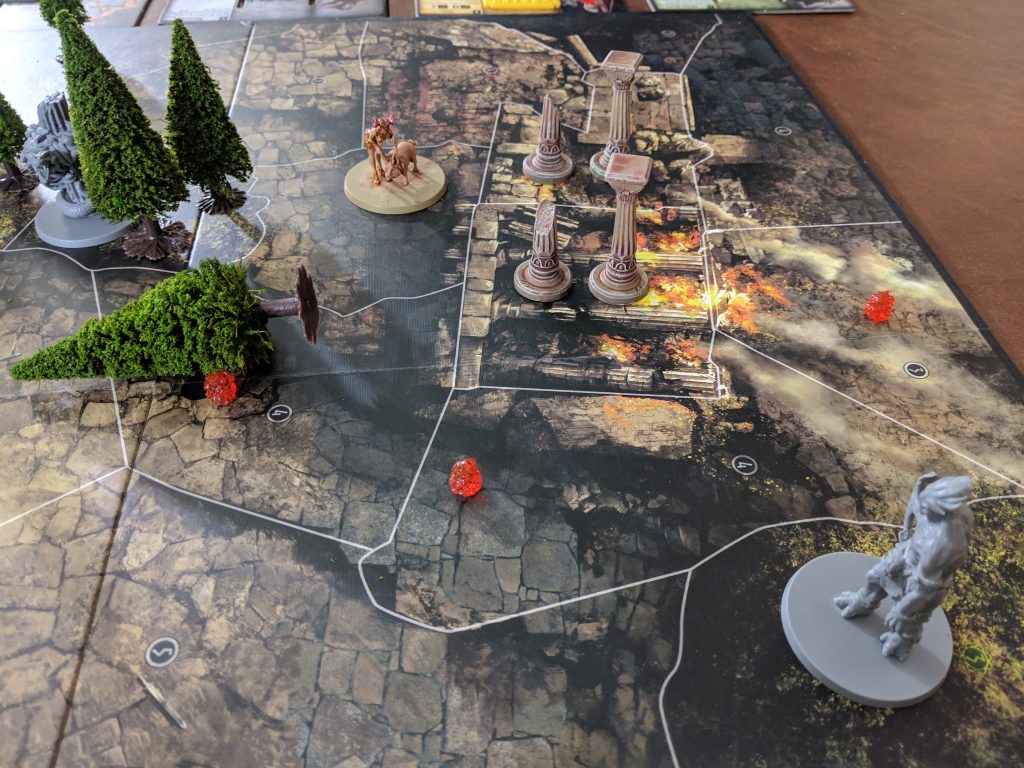 Athena sprang into action, driving forward to retrieve the omphalos herself while distracting Zues and Campe with her owl. Leonidas moved up to protect her, and Ladon slithered forward to attack Zeus, Campe, and Polyphemus. Most of the bites failed to land, serving more to anger Zeus, who strode forward and hurled lightning at Athena and Leonidas. His rage blinded him, though, and he missed, causing minimal wounds and succeeding in only knocking Leonidas away. 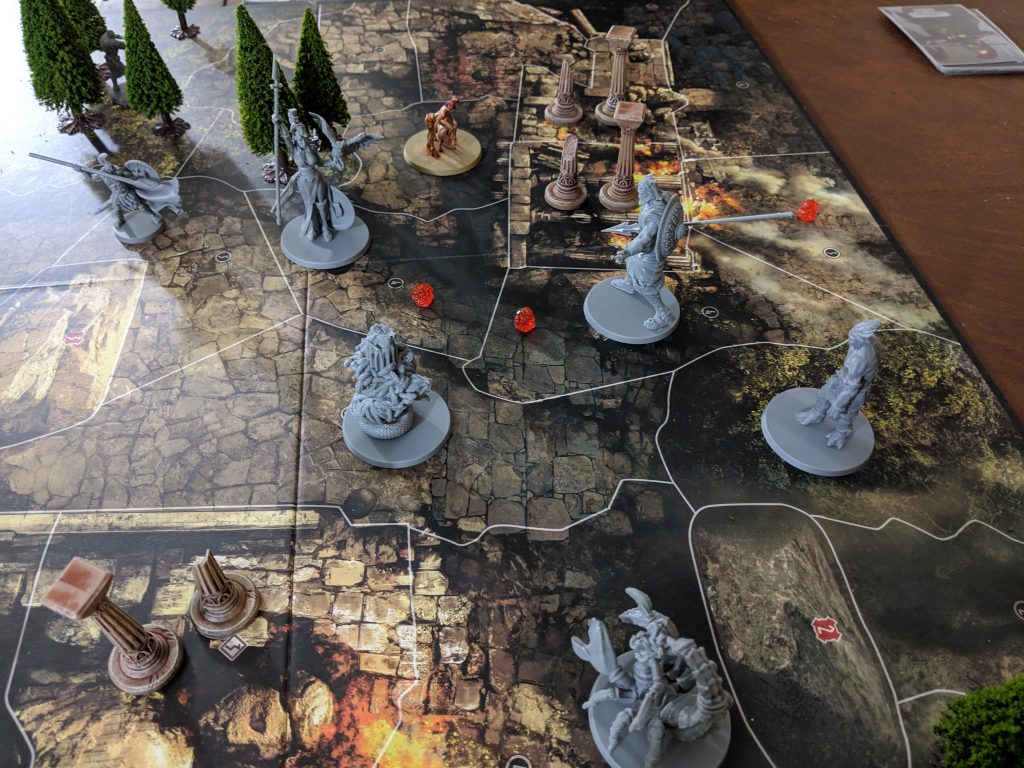 Taking advantage of Zeus’s vulnerability, Leonidas and Ladon both rushed forward to attack, landing serious blows and injuring Zeus. Campe, sensing the tide of battle turning, rushed forward to protect Zeus while he absorbed another omphalos. 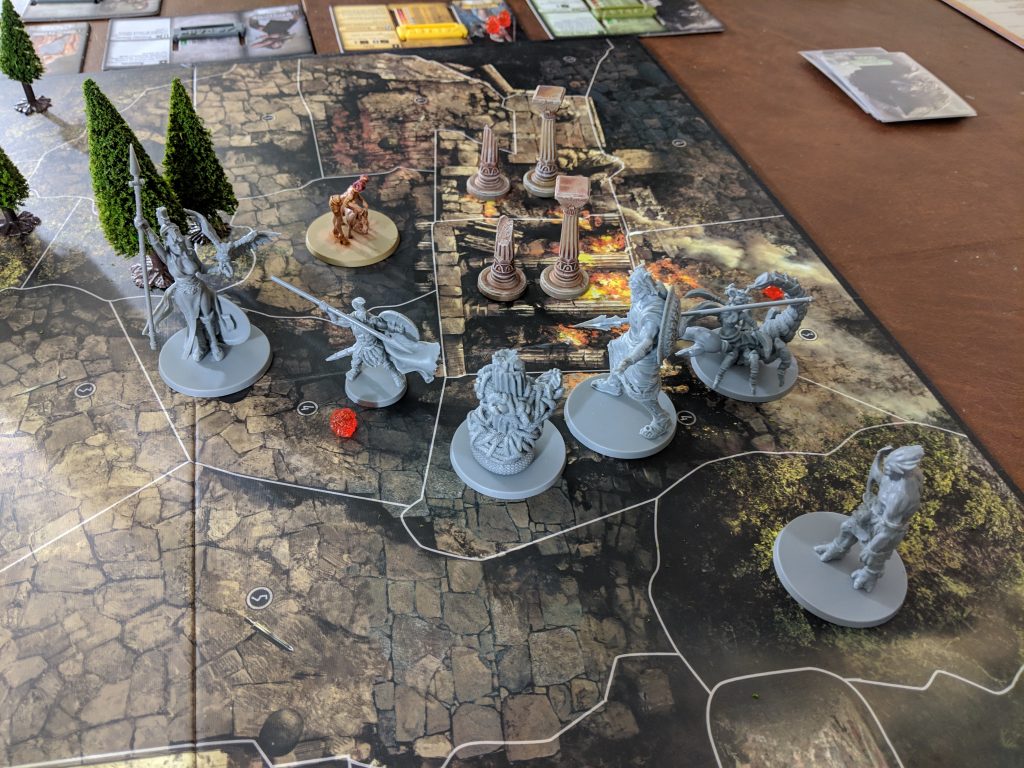 At this point, Athena realized her danger, and quickly absorbed the nearby omphalos. With only one gem left, Polyphemus collected it from afar and hurried to Zeus. Struggling to keep Zeus from absorbing the final omphalos, Ladon and Leonidas attack with the desperate hope of slaying Campe to reach Zeus. Campe suffered both brutal attacks but clung to life long enough for Zeus to absorb the final omphalos and claim victory. 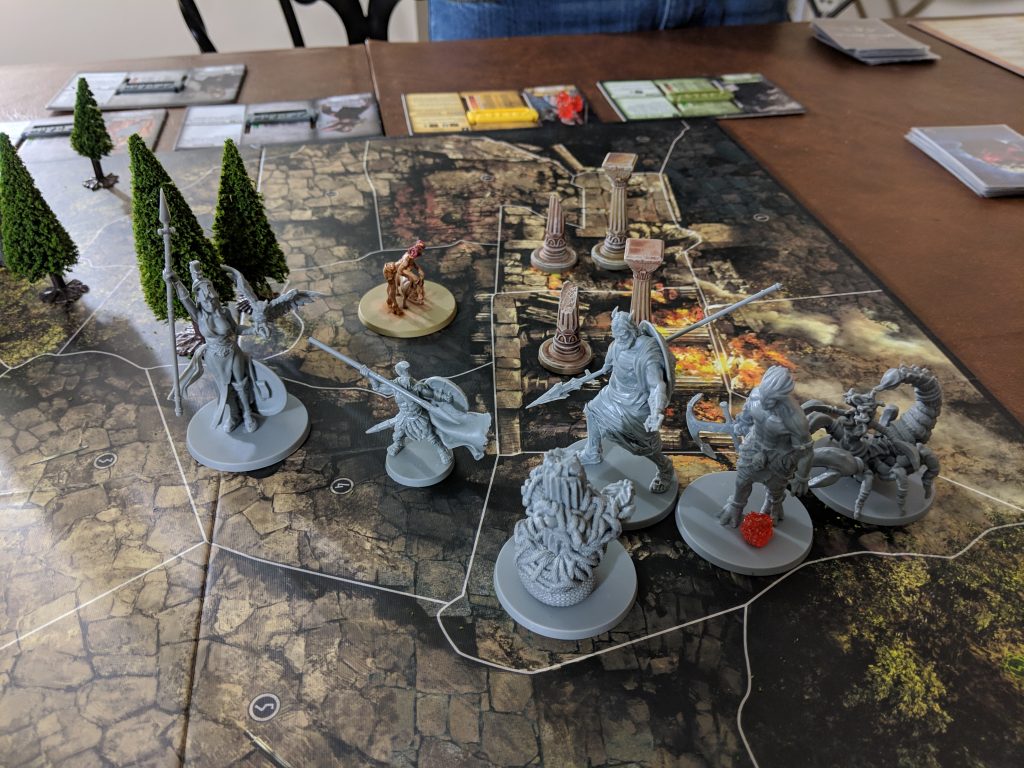