“Know, O Prince, that in the time when Conan the Cimmerian sat upon the Throne of Aquilonia there arose whispers from Stygia. Whispers of a scheming sorcerer whose black heart was set upon vengeance…” 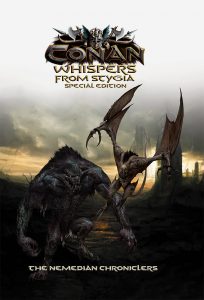 The Whispers from Stygia campaign from 2018 was my first fan-made project and where I met Matt, Dan, Kevin, and Neil. The original version was a little rough around the edges, because we were all writing our own scenarios with just a general idea of how they would tie in together. It was a great learning experience on how to work with people through vast geographical distances and the importance of communication and organization. These lessons helped when I began working on the Tome of Skelos for the recent Conan the Conqueror expansion.

In any case, I now have a better understanding of scenario design/campaign unity and player feedback (as well as access to better source files) I thought it might try to tighten up some loose ends both graphically and in game-play. Since Dan had written a scenario that didn’t make it into the final version, it made sense to include it as well. However, what excited me the most was the idea of adding solo/coop versions for the campaign. I must admit I am co-op gamer at heart, and I really love the challenge of pushing the boundaries of new ideas. Most of my time was spent converting the entire campaign to solo/coop. It was a lot of effort, but overall I believe it was worth it.